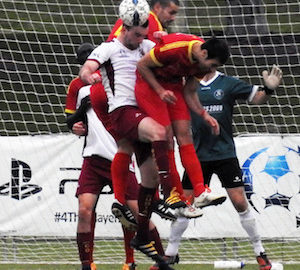 Stirling Lions put an end to a run of three consecutive losses after a convincing 3-1 win over Subiaco at Rosalie Park on Saturday.

Daniel Micevski, Shane Cassidy and Teeboy Kamara got on the scoreboard to take the visitors to fourth place.

Subiaco could not secure a second win of the season despite a goal from new boy Michael Lawson and remains stuck to the bottom of the ladder.

One week after their first win of the season, Subiaco was eager to get a second victory against the team that gave them a 7-1 thrashing in round one.

A shot from striker Adam White, last week’s hero with a brace, ended on the wrong side of a post.

The Subiaco defence had an unlucky touch to a set piece from Stirling captain Milorad Vujacic and Daniel Micevski did not miss the golden opportunity to net.

Subiaco responded with two headers from James Casserly after corner kicks, but on both occasions the ball went wide of Stirling goalkeeper John Perkins’ goal.

The Lions did better at another set piece six minutes before the break. Vujacic again offered the perfect assist. This time it was Shane Cassidy who responded to score the Lions’ second.

“Our captain did really well to bring the ball from those free kicks,” he said.

“The last couple of weeks we dried up a bit. I am pleased to have scored a few goals again. We controlled the game and defended well.”

The Lion’s came out the more dangerous team after the break. Mathiang Mathiang, Teeboy Kamara and Jamie Gibson all had good opportunities, but could not convert them into goals.

After excellent collective midfield play, Subiaco’s new signing Michael Lawson delivered a clinical finish from outside the box to bring the home team back in the game.

With 10 minutes to play, Kamara put the game to bed with his ninth goal of the season after an excellent pass from David Micevski.

Subiaco coach Michael Brazil said his side did not create enough chances.

“Last week we put in a very good performance. Now it was pretty poor,” he said.

“The intensity wasn’t there. And we weren’t helped by some decisions that were made.”