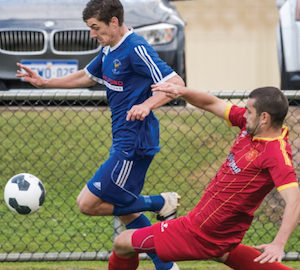 Two goals from Angel Andres have earned Cockburn City a place in the Westfield FFA Cup Round of 32 after their 2-1 win over Stirling Lions at Macedonia Park yesterday.

Winning coach Scott Miller praised the unpredictability of cup football – and appropriately so, with Cockburn losing 7-2 when the teams last met in the Playstation 4 National Premier Leagues WA two months ago.

“It’s a fantastic feeling,” Miller said. “I thought (playing at Macedonia Park) was going to make it a hard one. But the boys played really well – I thought our defensive work at the back was outstanding.”

Cockburn have also earned a place in the Cool Ridge Cup final on July 23 at Dorrien Gardens where they will take on Floreat Athena.

Stirling had a few chances early with winger Teeboy Kamara coming closes with a shot that flew across the face of goal. Cockburn, however, were first to draw blood.

A quick counter-attack that started from the goalkeeper resulted in Andres firing home from outside the box in the 23rd minute.

The celebrations were short-lived, however, as Stirling drew level thanks to a superb strike from Graham Doran on the half hour.

The sides could not be separated until a clumsy challenge led to a Cockburn penalty that was converted by Andres.

Despite multiple breakaway attempts from Kamara and a painfully close headed attempt late in the game by Doran, Stirling were unable to find an equaliser.

Stirling coach Robert Milevski was disappointed with the outcome, especially given his side had conceded two penalties in as many games.

“We’ve narrowly lost our last four games,” Milevski said. “The effort was there today and on Saturday (in the NPLWA against Perth Glory), but again, some decisions have cost us, which led into the frustration in today’s game.”

He conceded his team needed to improve up front to reclaim its early season form.

“We scored 30 goals in our first eight games and I think in the last four we’ve only scored two,” he said.

“The attacking third is definitely lacking a bit of confidence there and we haven’t been ourselves … we’ll sit down and have a chat about it and go from there. The boys are gutted.”