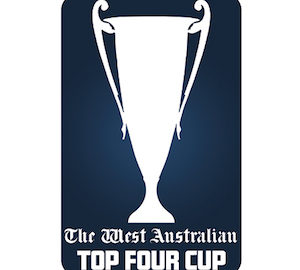 The U18’s are into the Top 4 Cup Final after a 3-0 victory over Perth Glory at Dorrien Gardens last Saturday.

Having already beaten Glory to the League title the week before with a 3-1 win at Ashfield Arena, playing some stellar football , the Stirling boys backed it up with another winning performance to head straight to the Grand Final.

Glory came close on a few occasions but for the most part were repelled in attack by a solid back line of Alan Reidy, Jayden Dods, Mason Langham and Ollie Watson. When Glory did manage to get the ball on target, goalkeeper Callum Atkins was always well positioned to save or direct the ball around the goal posts. Atkins pulled off a tremendous one handed save when the Glory striker managed to breach the defence for a one on one with the Stirling keeper. The save seemed to lift the Stirling side and just before half time, Tom Balch ghosted forward to the edge of the Glory penalty box after Stirling launched a trade mark counter attack to bury a cross into the net. Stirling went into the half time break 1-0 up but the big talking point at the break from the Stirling supporters was the defence being able to hold the Glory side out after having the kitchen sink thrown at them for at least 40 minutes prior to Stirling’s goal. It was a superb display from the defence and the whole team for that matter and really demonstrated the training sessions held in ball possession to the opponent which really proved pivotal.

Coaches Keegan Ashley and a rather unwell Sam Atkins must have said the right things at the break and adjusted player rotations because the Stirling side came out with more purpose from the beginning of the second half. Ben Campbell could have given Stirling a two goal buffer early on after good work down the right from Bleron Mamudi who found Campbell on his own in the box, only for the Stirling striker to misdirect a first time strike wide of the left post. As Glory pushed for a goal, openings began to appear and Stirling managed to go another goal up courtesy of a well taken finish from Mamuidi who beat his marker, rounded the Glory keeper and finished well with his left foot. The goal seemed to deflate the Glory side because from that point, Stirling always looked the more likely to score more goals and eventually did following substitute, Denzel Tshuma’s arrival into the penalty area to put away a cross for a 3-0 lead.

The final score was more reflective of the second half performance , had it not been for the hard working defensive effort from the boys of the back four and the midfield unit of Tom Balch, Robbie McNeill, Joey Perkins and Daniel Stone, the score line in the first half could have been in the Glory’s favour. Keegan Ashley said after the game ”The boys are winners with a winning mentality and worked very hard in the first half of the game , second half we started to get on the ball a lot more and we got our rewards.

Stirling play the winner of the Perth Glory v Subiaco match being played on Wednesday evening.

The Grand Final match is at Dorrien Gardens (Perth SC) on Saturday 10th Sept at 10.30am. Come along and support the boys!