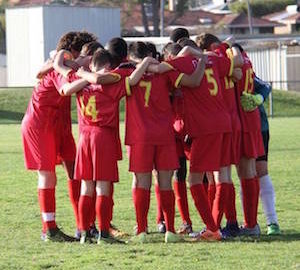 The U14 NPL Season has finished on a high last weekend with a hard-fought 1-0 victory over second placed ECU.

The team finished the regular season 16 points ahead of ECU in pool B with a record of 17 wins, 1 draw and no losses. Coach Antony Benetti has the boys displaying a competitive brand of football that encouraged the players to be confident on the ball and disciplined in defence. This achievement is highlighted by the 78 goals scored and 6 conceded over 18 games.

While the statistics seem impressive what was pleasing was the commitment to development the players and coaching staff strove for. Great courage and spirit was shown by all involved which seemed a trait of all the lions teams this year. The competiveness in games was evident and so to was the good nature the players displayed.

A big congratulations to the team on progressing to the finals but more importantly to the players for showing great character that no trophy could overshadow.