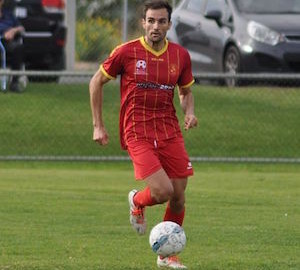 The Micevski brothers put on an offensive display, scoring all five between them with David securing his hat-trick before the first half was out.

This was the fourth straight win for Stirling and coach Rob Milevski was impressed with his team’s efforts.

“We started well with an early goal, did some high pressing on the defensive end and forced them to make mistakes,” he said.

“We’re fortunate enough to have punished them early and hold our own defensively.”

David Micevski scored his first of three in the 12th minute after Sorrento keeper James Morgan was unable to clear the ball due to pressure from Jason Rubidge.

Stirling doubled their lead in the 18th minute after a cross into the box from Daniel Micevski was cleared into the waiting boot of David Micevski who struck home from the top of the box scoring his brace.

Sorrento had a chance to put themselves on the board in the 26th after a chip from the right corner from captain Daryl Platten found the head of Sean Canham who couldn’t find the back of the net.

Sorrento coach Jamie Harnwell said his team gave up too many easy goals and weren’t able to make their own chances count.

“We’ve got to get back to basics and start defending well like we did in the first half of the season,” he said.

The Lions continued their performance and David Micevski scored his third in the 37th minute after another stumble from Sorrento keeper left the net open, Micevski saw the opportunity and sent a low flying ball home.

Only one minute later Stirling scored their fourth, Daniel Micevski scoring his first with a strike from outside the box soaring past Sorrento defenders and into the top right of the net.

The remainder of the game was slow with both sides having an equal number of chances, but it was Stirling who put the nail in the coffin, with a fifth and final goal coming from Daniel Micevski in the 72nd.

David Micevski said he was happy with his personal performance but was even more impressed with the efforts of his team.

“We had the wind in the first half and we made it count, obviously it’s nice to score the hat-trick but at the end of the day we got three points and that’s the main thing,” he said.

Round nine of the PS4 NPLWA, Stirling will host Balcatta while Sorrento will be playing away against Armadale.