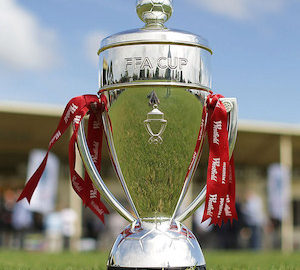 Three extra-time goals to Brodie Martin, Blamo Quaqua and Jason Rubidge, who completed his hat-trick, was enough to put the home side into the next round.

Rubidge praised the composure of his team to pull through, while also praising the opposition’s resilience.

“They [Curtin] defended really well. They took their chances in attack; I think they only had a couple of shots and they made them count,” he said.

“We were told [after regulation time] to get back to the game plan. A couple of times in the first half particularly we went away from it and there was just too much fancy stuff. We needed to get back to basics.

“At the end of the day, at least we got through, that’s the main thing, being through to the semis.”

Stirling looked like they would make easy work of Curtin after a brilliant assist from Teeboy Kamara saw Rubidge slot one into the back of the net after just five minutes.

Curtin, however, were able to deal with constant attacking pressure from the home team, and with a rare opportunity up forward, Khaled Salhah managed to draw a free kick and convert with a powerful set-piece.

After what had been an open and very attacking first half, Stirling upped the ante early in the second with a flurry of quick attacking breaks, orchestrated primarily by Kamara’s speed on the wing.

However, there was plenty of frustration on the pitch and in the stands as Curtin’s miserly defence continued to force Stirling into offside traps.

The ball spent a lot of time in Stirling’s final third, and the result looked set in stone when the favourites kicked true in the 79th minute – a second goal to Rubidge – to bring the score to 2-1.

Curtin refused to be denied, though, a chain of precise passes through the middle of the ground saw the ball land at Arijan Stovrag’s feet and he fired it into the goal in the dying stages of regular time to force the crowd into hysterics and the game itself into extra time.

Stirling took their class advantage into the next stretch of play, and substitute Martin was able to convert with a break-through shot at goal in the 95th minute.

Rubidge completed his hat-trick early in the second half of extra time, while Quaqua sealed the deal in the dying seconds to see the home team walk away with a 5-2 win.

Curtin coach Campbell Ballantyne emphasised that while there was a case for mixed emotions, both coaches and players could hold their heads high.

“I said to the boys, I’m so proud of their performance today. To take Stirling Lions to extra time was phenomenal.

“We’ve just had a Stirling Lions supporter come up and say ‘Well done’. We’re a division two side. We’ve been a state league side for three years. Stirling have done it all, they’ve won the state title on a number of occasions. This is the furtherest we’ve ever been, so I’m happy.”