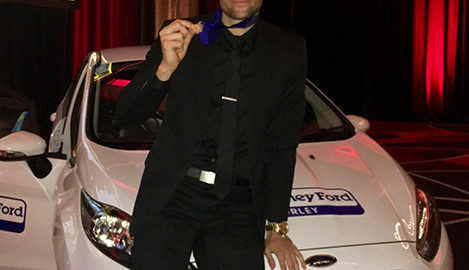 Stirling Lions’ attacker David Micevski was crowned the 2016 NPL WA Player of the Year winning the Mcinnerney Ford Gold Medal. Featuring 9 man-of-the-match performances, he accumulated an astounding 38 points,  a lead of 11 points ahead of Armadale’s Jesse Fuller who finished on 27. Micevski has made history with the only person in WA winning this prestigious award twice!

Micevski also claimed the #PS4NPLWA The West Australian Goal of the Season which was out of 500 goals scored during the course of the season.
After recently attending the PS4 Player Pathway Camp, Teeboy Kamara won the Dylan Tombides Young Player of the Year Award. On the back of a successful U18 season, Ben Campbell won the U18 Troy Bernard Player of the Year.
After a successful season across all age groups the Stirling lions are now showing that there player development and pathways are reaping rewards. Stirling lions are giving opportunity to players and they are flourishing for all to see.

Stirling Lions FC are so proud & delighted to announce that our own Cara Bensky has accepted the position as Zone Representative at Football West! The Stirling Lions football community wishes her all the best!