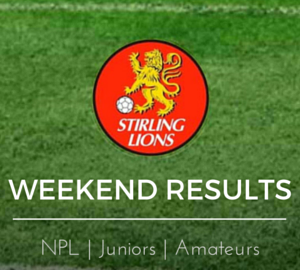 A busy week at Macedonia Park with Stirling Lions NPL hosting Inglewood, whilst most of our Junior teams and MiniRoos teams also played at home. 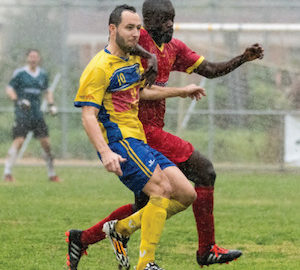 Stirling Lions and Inglewood United earned a point each after a scoreless encounter in Round 17 of the PlayStation 4 National Premier Leagues WA at Macedonia Park on Saturday.

The score line did no justice to what was a tightly contested battle, fought in tough conditions created by heavy downpour and pitch saturation.

Stirling’s Rob Milevski said a draw was a fair result given the circumstances.

“Obviously the weather made it very tough to play any sort of style of football,” he said. “In the second half it was tough even to just move the ball on the floor.”

“We were a little bit unlucky not to snatch it in the end but I think a draw was probably a fair result.”

Inglewood dominated the early stages and used strong tailwinds to their advantage, with Adam Tong firing a powerful long range effort in the 11th minute to force a great diving save from John Perkins.

The visiting attack was forced to reshuffle when Brian Woodall left the field in the 18th minute with a tweaked hamstring, replaced by utility-man Tim Robertson.

Kenny Keogh had a number of shots and headers on target but Perkins was in fine form to consistently deny him.

Stirling’s chances in the first half were limited with strong headwinds denying them the opportunity to play the long ball.

Robertson had several chances to put the visitors ahead early in the second half including a classy flick-on from an Ash Rosindale free kick on the hour mark.

In the 77th minute Stirling substitute Jamie Gibson produced a moment of brilliance and opportunism that very nearly gave his side the lead.

Gibson intercepted a defensive header from Josh Pereira, took the ball on his chest and fired a powerful volley that looped over Dunn and very narrowly over the crossbar.

In the final 10 minutes it was Stirling who began to look more confident as they pushed for the win.

Stirling nearly claimed the points in injury time when Kamara broke free on the right and drew Dunn out of his area.

Kamara squared it to David Micevski who has found the net 15 times this year but uncharacteristically he fired it just over the bar with the goal at his mercy.

Inglewood’s Taki Nicolaidis said he was proud of his side and spoke highly of opposing target-man Micevski, who played at Inglewood last season and finished as the club’s top scorer.

“I won’t say we were the better team but I thought we had the better chances over the 90 minutes,” he said.

“David’s shot at the end; normally in those situations he’d bury that.”

The result sees Inglewood and Stirling maintain their positions on the league table at first and fourth respectively. 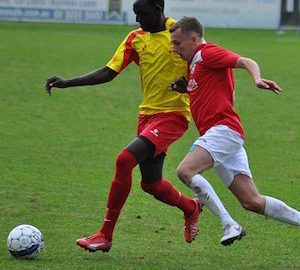 ECU Joondalup moved up to sixth place on the PS4 National Premier Leagues WA table after a thrilling 3-2 win against Stirling Lions at a wet and windy ECU Football Stadium on Saturday.

The home side looked in control after a brace from striker Daryl Nicol but the Lions hit back with goals from David Micevski and David Sesay.

It looked like the points would be shared but a free kick from Andy Higgins deep into stoppage time won it for Dale McCulloch’s side.

McCulloch said his side showed fantastic character to win the game and keep their unbeaten run going.

“We’re normally on the end of those sort of results,” he said. “But the character the lads showed today bodes well for the rest of the season.

“They (Stirling) are a very good side but today we showed how far we’ve come this season and what were all about.

“We created a number of chances and to get the late winner is great and I’m really buzzing for the boys.”

Two-goal hero Nicol said it was disappointing to give the lead away.

“It was an absolute thriller in difficult conditions but the boys dug in deep and I really thought we deserved the points,” he said.

“We were cruising with a two-goal lead and they got a dubious penalty and that gave them a lift. But the character of the lads to push to the last minute and score the winner was fantastic and it puts us back in the mix.”

Lions coach Rob Milevski said they had the chances to win the game but failed to convert them.

“We’re disappointed to lose the game,” he said. “But the conditions were tough out there and we found ourselves two goals down.”

“We fought back to level and from then on we had enough chances to go on and win it, but it wasn’t to be.

“We got caught on the break for the second half and gave away a couple of silly free kicks for the other two, and that has cost us today.”

The rain hadn’t abated for most of the day but the pitch had held up well and it was a fast start to the game. The home started the better and Lions custodian John Perkins was in the thick of the action early.

First on eight minutes Gordon Smith’s long-range shot was well saved by Perkins before the keeper tipped over another Smith half volley moments later.

But their pressure was rewarded with the lead on 17 minutes. A quick free kick from Steven McGarry caught the Lions napping and Nicol superbly curled the ball over Perkins from the left hand side of the penalty area.

David Micevski continued to be a threat for the Lions and his volley flashed over the top on the half hour but it was the home side who ended the half the better.

Perkins was again alert to save Gordon Smith’s shot on the run after the Scottish striker had been sent clear by Tommy Amphlett’s through ball but at the break the home side lead.

The Lions should have levelled seven minutes into the second half. The lively Teeboy Kamara raced past three ECU defenders before squaring the ball to Jamie Gibson but with the goal at his mercy the striker failed to hit the target.

That miss came back to haunt the visitors three minutes later as the home side doubled their lead.

The Lions were convinced they had a penalty after hand ball in the ECU box but their protests were waved away by referee Stuart Muldoon and ECU raced clear.

Amphlett sending Nicol in down the right, he held off his marker and finished clinically past Perkins.

ECU, who hadn’t conceded a goal in the past five games, looked in control but two minutes later the Lions were awarded a penalty after Kamara was brought down in the box by Ryan Lowry.

David Micevski stepped up but Lewis Italiano guessed the right way to save but Micevski was the quickest to react to score the rebound.

It was the lifeline the Lions were searching for and four minutes later they levelled.

A mix up at the back and ECU failed to clear their lines. The ball fell to Sesay whose shot from the edge of the penalty area flew low past Italiano to level.

It was now the Lions who were dictating terms and Italiano got down well to save David Micevski’s curling shot before the ECU custodian saved low to deny Gibson moments later.

But the home side regained the ascendancy and Gordon Smith was sent in on goal by Steven McGarry on 83 minutes but Perkins stood tall to deny him.

The home side continued to press and in stoppage time and they won a free kick wide on the right.

Higgins’ curling set-piece looked like it took a flick off Gordon Smith and into the net, but the goal was awarded to Higgins. 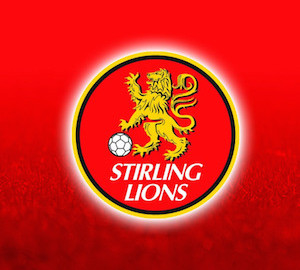 Stirling Lions boosted their top four aspirations with an emphatic 3-0 home win over Cockburn City at Macedonia Park on Saturday.

The end result would have been more comprehensive had Micevski’s brother, Daniel, brought his shooting boots.

The diminutive attacker spurned four guilt-edged opportunities on a day City were there for the taking.

Despite seeing his side miss a host of opportunities, the Lions boss was happy with the three points, especially with other results on Saturday – Inglewood United taking over at the top after a 2-1 win over Bayswater City, while Floreat Athena defeated Subiaco – increased the competition for a top four finish.

“I’m pretty happy with that performance and I thought it could have been seven or eight today,” Milevski said.

“It was a solid performance all around and a great way to honour a club legend, Ross McGinn, who we held a minute’s silence for prior to the game.

“We knew it was an important game because we knew one of the top two would falter. At the start of the season the target was top four football and at the minute we’re in the hunt, looking to win the premiership title.

“We just have to keep the momentum going. The boys were really good today, it was an excellent performance.”

Just two days after earning a Westfield FFA Cup Round of 32 draw at Melbourne Knights and having earned a confidence-boosting 1-1 draw at reigning champions, Bayswater City, last time out, Cockburn produced a performance to forget.

On a disappointing playing surface, the first half took time to get going and once it did it was Stirling who looked the most likely to open the scoring as David Micevski and Kamara both forced Luke Radonich into saves in the opening 20 minutes.

City almost took the lead on 23 minutes when neat combination passing on the edge of the box involving Nathan De Abreu, Julian Teles and David Arya opened the door for Ruben Triasto to try a shot.

John Perkins made the save and Stirling broke immediately down the right for Kamara to nod in his ninth of the season.

The home side started the second half in perfect fashion with David Micevski proving fleet of foot to open space in the box before curling a stunning shot over Radonich and into the corner of the net.

Daniel Micevski then came to the fore, missing out on an eight minute hat-trick as he was denied three times by Radonich before, on 78 minutes, he missed a sitter – scuffing Lucas De Lima’s cross wide from just 6m.

Those missed chances were unimportant at the end as Kamara made it 3-0 with six minutes to go when he fired home Brodie Martin’s incisive pass.